ON DISPLAY AT JELLICO HIGH SCHOOL
IN THE AUDITORIUM
NOVEMBER 12 THROUGH NOVEMBER 30, 2020 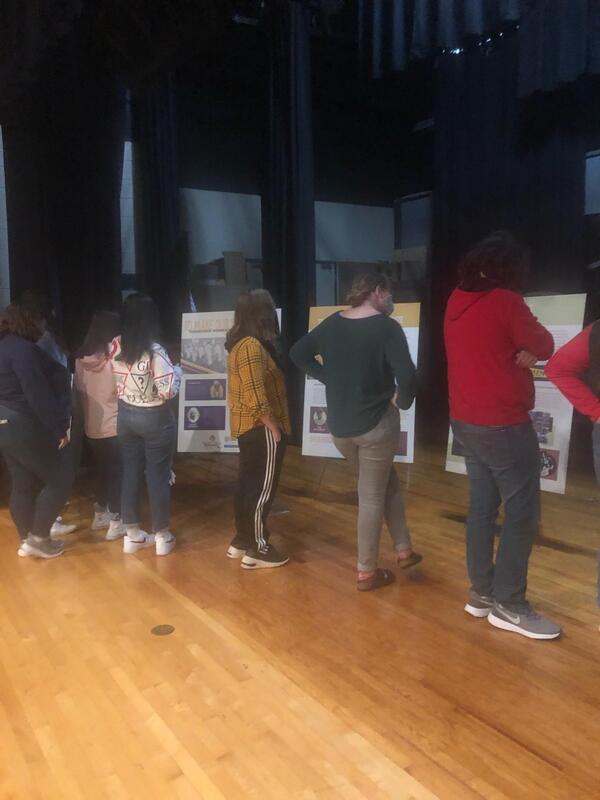 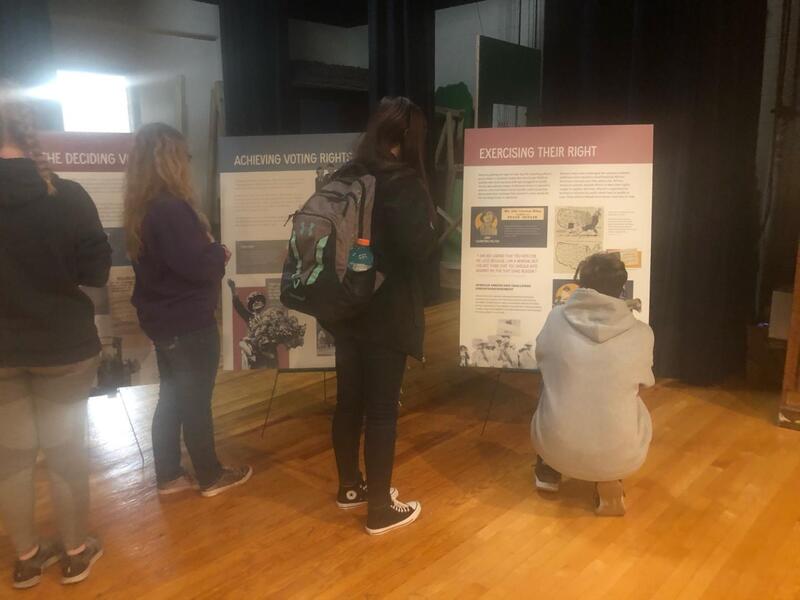 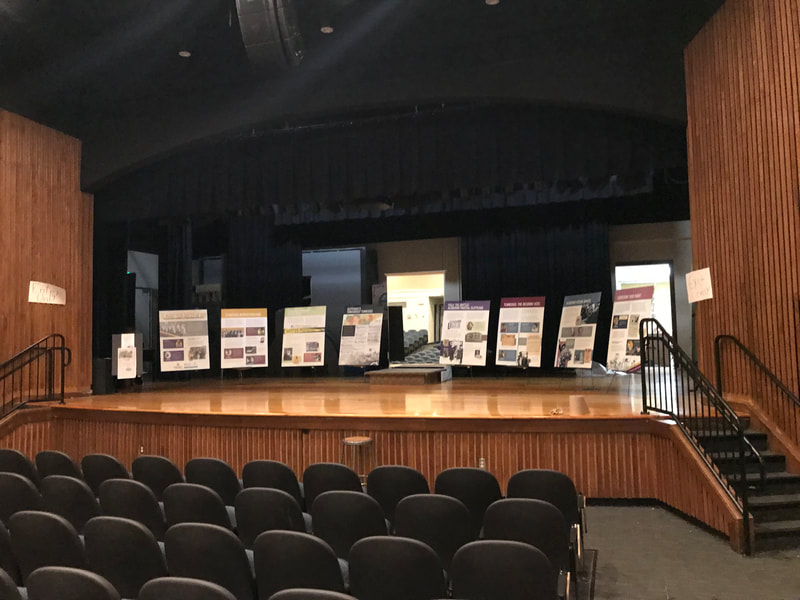 For all the information please visit:  ​tnmuseum.org/
Due to Covid-19 the Exhibit will be a traveling one.  It consists of 8 3' x 4' Foam core boards depicting the history of the movement over the years of struggle.  We will be at Freeman Park with the boards Tuesday, August 18 at 2 p.m.  Watch our Facebook and Website for future exhibit opportunities.  If your facility has public access with Covid 19 Social Distancing and would like to host the exhibit for at least a week or more, please contact Postmark LaFollette at postmarklafollette@gmail.com.

THE END OF THE STORY

​The 19th (Susan B. Anthony) Amendment passed the U.S. House and Senate on June 4, 1919, and was sent to the states for ratification. To become part of the U.S. Constitution, the Amendment needed to be approved by 36 of the then 48 states. By July 1920, 35 states approved the amendment, and suffragists needed just one more state to reach the “Perfect 36.” Tennessee held the last, best hope.
1878
Sen. Aaron A. Sargent of California introduces the Woman Suffrage “Susan B. Anthony” Amendment; would have been the Sixteenth Amendment to Constitution. When passed as the 19th Amendment passes forty-one years later, it is worded exactly the same as the 1878 Amendment.

When Gov. Albert H. Roberts called the Tennessee General Assembly into special session on August 9, 1919, the eyes of the country turned to the Volunteer State. Pro-suffragists and “antis” from around the state and nation descended on Nashville, intent on influencing the legislature. Tennessee’s War of the Roses commenced. And one man’s vote would ultimately decide the issue.
​In what became known as Tennessee’s War of the Roses, pro-suffrage activists wore yellow roses as a symbol of support, in stark contrast to the red roses of the opposition. Fierce lobbying commenced on both sides of the issue, but the resolution passed easily in the Tennessee State Senate.
Now women lobbied furiously to secure votes in the House of Representatives where the vote was extremely close, creating an even split among Tennessee state representatives.
August 18, 1920: The Perfect 36
On August 18, 1920, suffragists and anti-suffragists packed the public galleries in the House chamber for its vote. Members and spectators wore yellow or red roses, reflecting their stance. The atmosphere was tense.
The Speaker of the House, Seth Walker of Lebanon, served as the anti-suffrage leader although he had previously advocated for suffrage. Joseph Hanover of Memphis led the suffrage cause in the House. After Seth Walker tried unsuccessfully to table the amendment, which would have effectively “killed” the bill, the House was required to vote on the 19th Amendment. As the roll call began and votes were tallied, the youngest member of the House, 24-year old Harry Burn of Niota, faced a dilemma. In his coat pocket sat a 7-page letter from Febb Ensminger Burn, his mother. Among general news of the family farm, Febb used the letter to persuade her son to change his anti-suffrage stance, writing “hurrah and vote for suffrage!” As Burn’s name approached for roll call, the young man, sporting a red anti-suffrage rose, shocked the chamber by claiming “aye” for the amendment, thus breaking a tie and changing the course of history.
After the General Assembly voted to approve the 19th Amendment, opponents worked feverishly to rescind the ratification vote on constitutional technicalities. They held mass “Indignation” meetings across the state and some “anti” legislators left the state.  Their efforts failed and on August 24, 1920, Governor Albert H. Roberts certified Tennessee’s ratification of the 19th Amendment.
Two days later, U.S. Secretary of State Bainbridge Colby issued a proclamation that officially declared the ratification of the 19th Amendment, making it part of the United States Constitution. Tennessee provided the 36th and final state needed to ratify this landmark amendment to the U.S. Constitution, earning itself the nickname “The Perfect 36.” Tennessee had given 27 million women the right to vote.

The above link will take you to the Educator Resources page for classroom use. 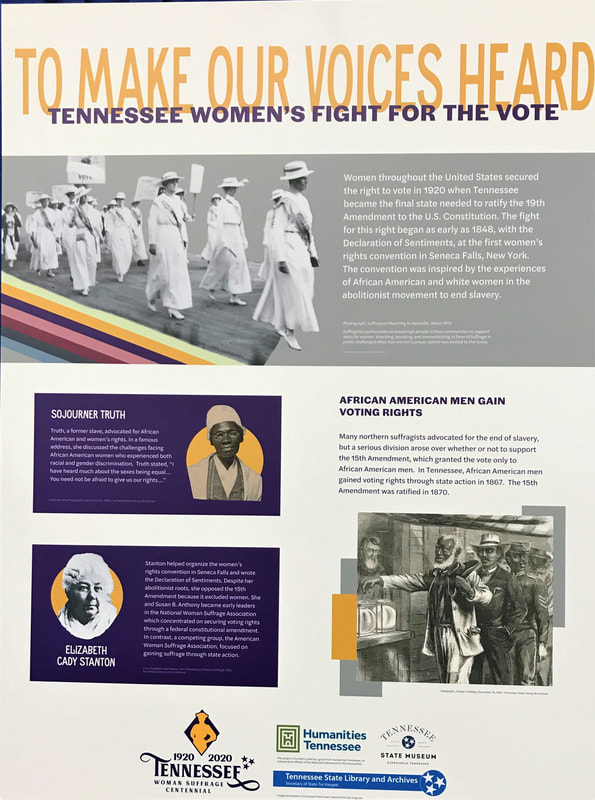 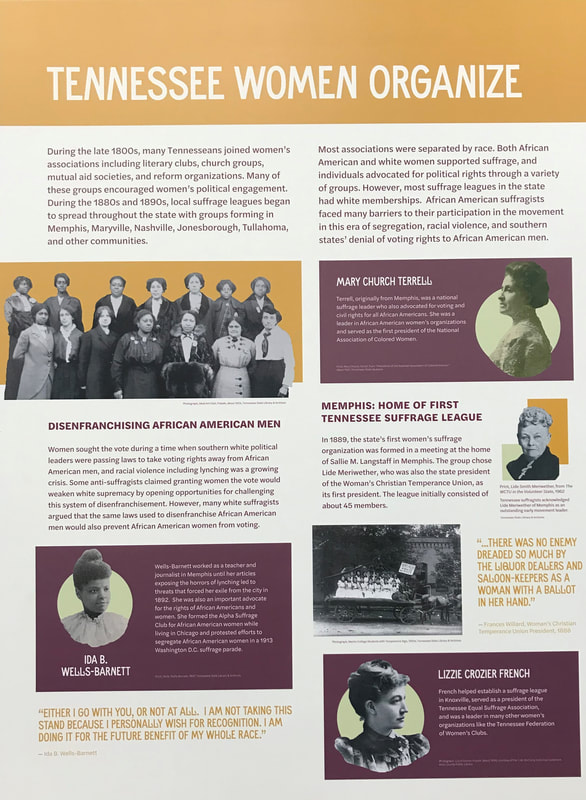 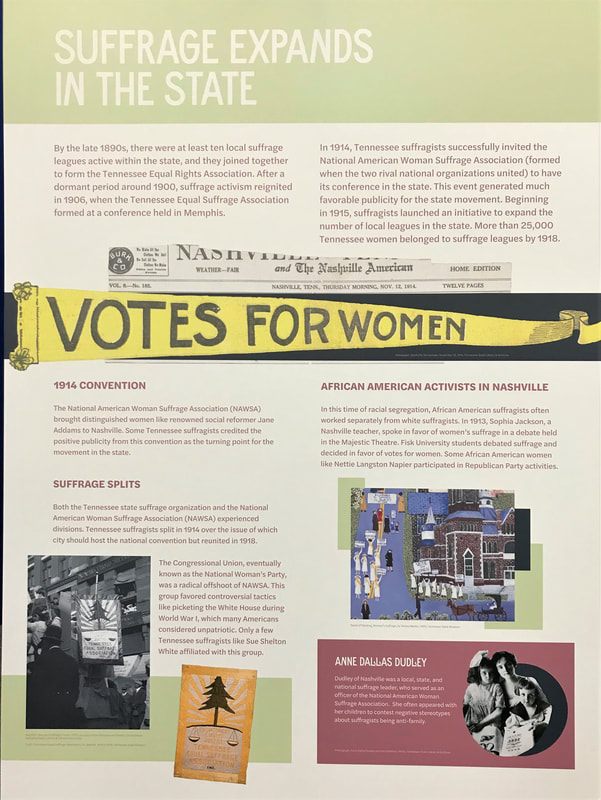 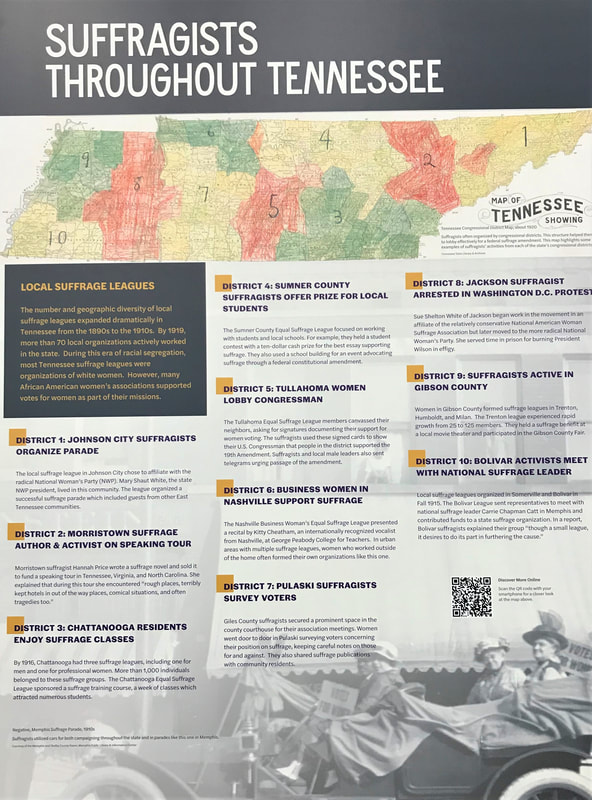 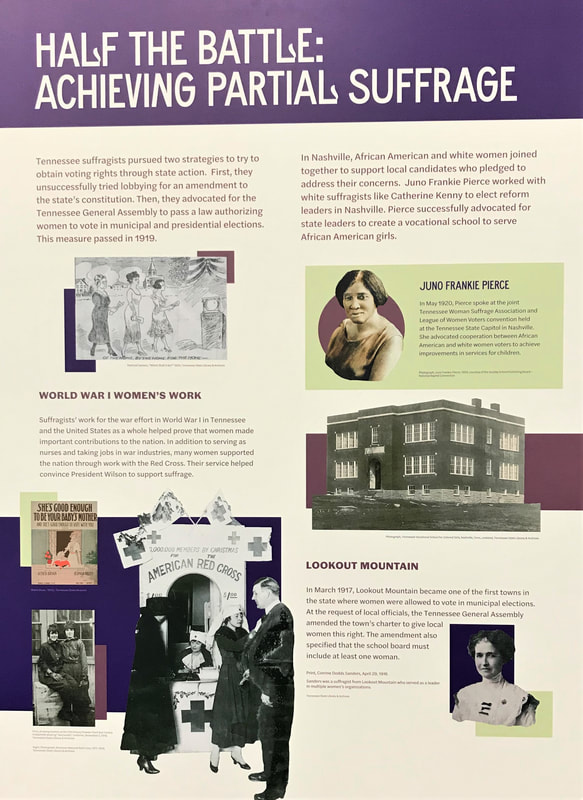 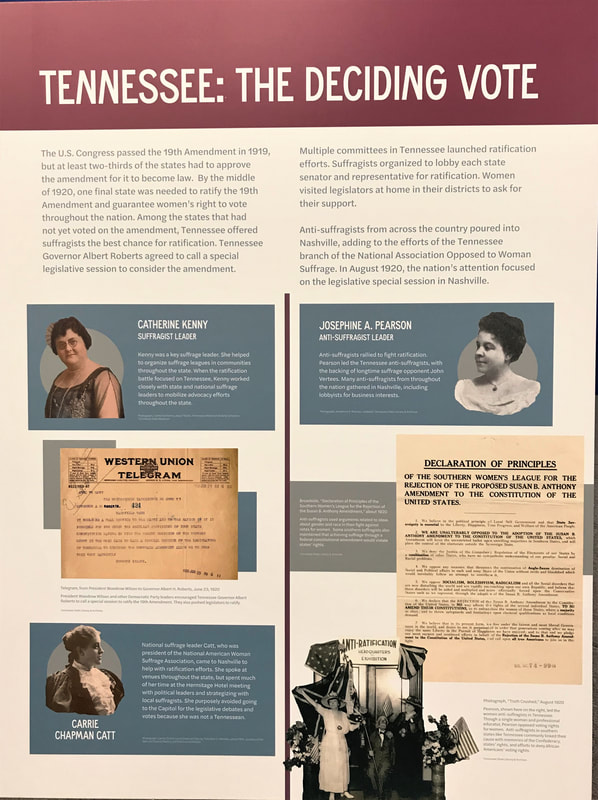 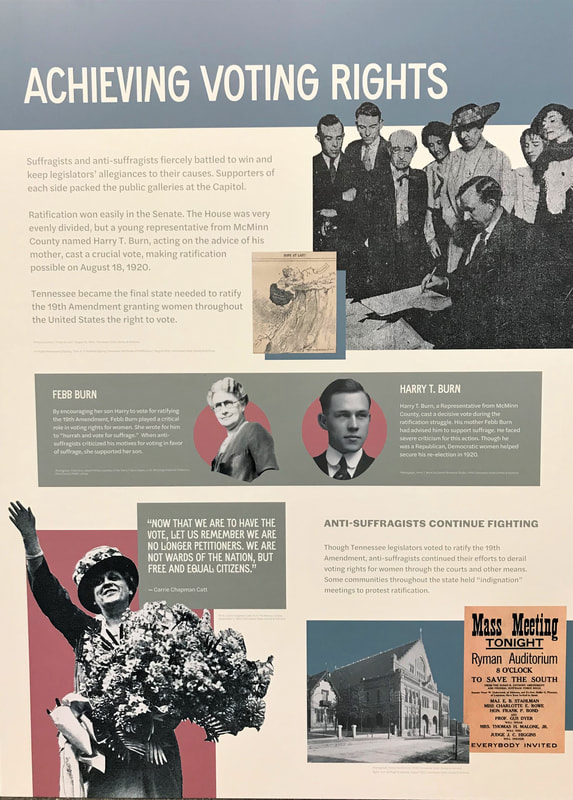 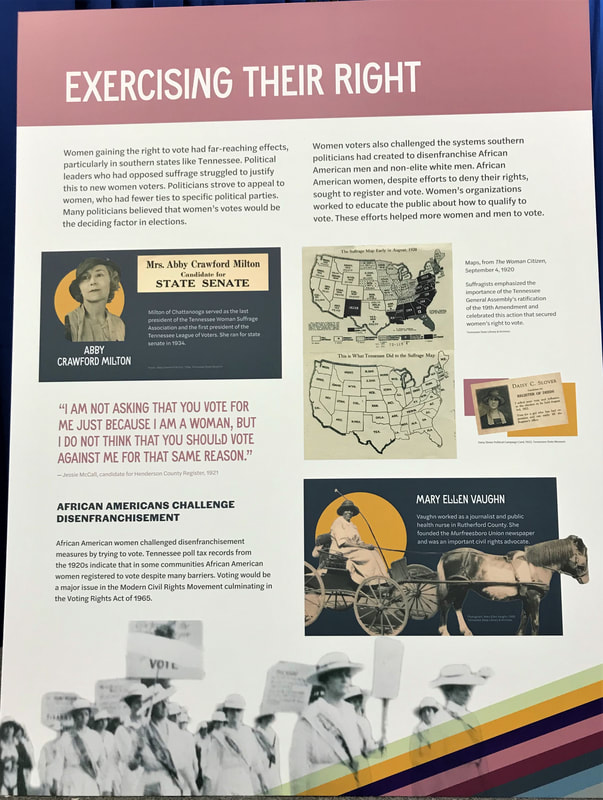